This service is in collaboration with CTOS IDS, a subsidiary under CTOS Digital Berhad

Enter your car VIN / Chassis Number to search for report 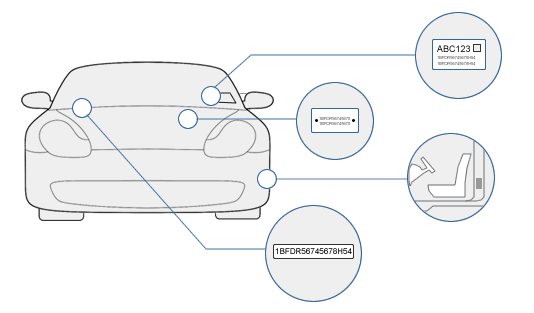 The vehicle identification number (VIN) is composed of 17 characters (digits and capital letters) that act as a unique identifier for the vehicle. A VIN displays the car's unique features, specifications and manufacturer.

The VIN can be found in a couple of places including on the car's registration label (1), on the compliance plate in the engine bay (2) or on the passenger side windshield (3), or on one of the door posts (where the door latches when it is closed) (4).

Look for the VIN in these other locations:

What is a chassis number?

Japanese carmakers do not use a Vehicle Identification Number (VIN) as is common in the United States and elsewhere. Instead, Japan uses a Chassis (Frame) Number — nine to twelve alphanumeric characters identifying model and serial number. For example, Chassis (Frame) Number SV30-0169266 breaks down as "V30" identifying the model as Toyota Camry/Vista x30; "S" identifying the engine (4S-FE), and "0169266" being the serial number of the vehicle. Vehicle make is not identified but slight number variations can identify the carmaker, i.e. Toyota usually uses seven digits for its serial numbers while Nissan uses six. Because a Chassis (Frame) Number contains far less information than a VIN, Japanese domestic model vehicles also use a Model Code. As an example, SV30-BTPNK breaks down as "SV30", which means the same as above, and "BTPNK" which designates a set of features incorporated in the vehicle.